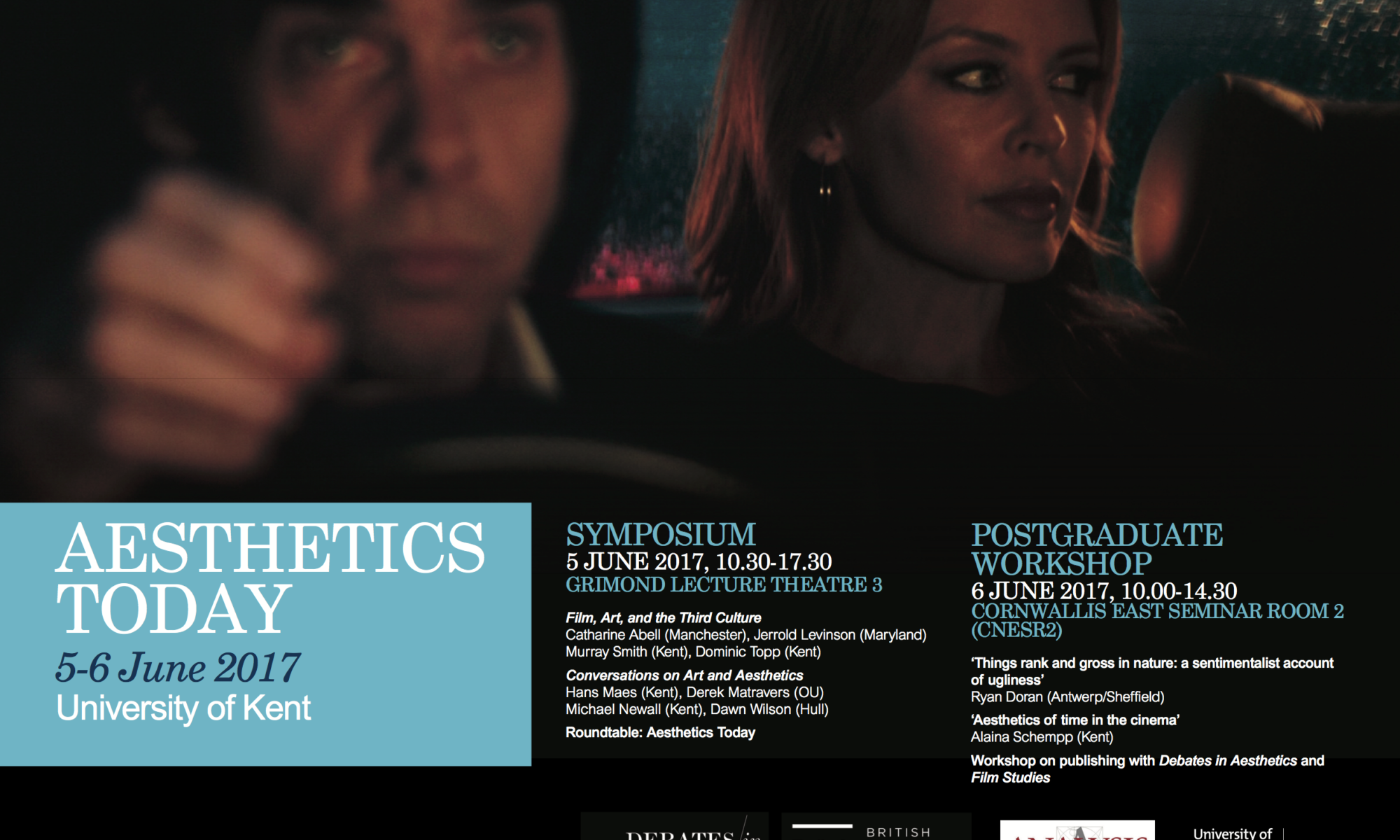 Marking the 10th anniversary of the Aesthetics Research Centre (ARC) at the University of Kent, Aesthetics Today will begin with a symposium on June 5 aiming to generate discussion concerning the most general principles and questions preoccupying philosophical aesthetics today. The symposium will be followed on June 6 by a postgraduate/early career workshop co-sponsored by Debates in Aesthetics (formerly the Postgraduate Journal of Aesthetics). Both events are supported by the British Society of Aesthetics and the Analysis Trust.

Smith responds to criticisms of role of evidence from cog sci for aesthetic inquiry. @Kent_Aesthetics pic.twitter.com/j1CjscDXJo

Topp comments on Smith’s claim about the challenge of the avant garde for naturalism via Lou Reed. @Kent_Aesthetics pic.twitter.com/D6jC8RgpVg

Aesthetics Today will take advantage of the publication this spring of two books by the co-directors of ARC: Hans Maes’ Conversations on Art and Aesthetics, and Murray Smith’s Film, Art, and the Third Culture: A Naturalized Aesthetics of Film (both published by Oxford). Both books are characterized by their broad scope. Maes’ volume is comprised of extended interviews with ten eminent aestheticians (Noël Carroll, Gregory Currie, Arthur Danto, Cynthia Freeland, Paul Guyer, Carolyn Korsmeyer, Jerrold Levinson, Jenefer Robinson, Roger Scruton, and Kendall Walton), in which Maes probes them on their own arguments as well as their views on aesthetics and the philosophy of art as a discipline, thereby engaging them in discussion of a wide range of specific debates in contemporary aesthetics. Smith’s monograph seeks to defend a naturalistic approach to aesthetics, principally through the exploration of film as a medium of art, but with a sustained comparative dimension incorporating discussion of literature, music, painting, and photography. In elaborating and defending a version of naturalized aesthetics, Smith inevitably addresses fundamental questions concerning the assumptions, methods, and boundaries of aesthetics. Both works connect fundamental principles with concrete cases in a wide range of artforms, and together we hope will form a strong platform for discussion of the general state of aesthetics today. The symposium on June 5 will bring together four invited speakers (Catharine Abell, Manchester; Jerrold Levinson, Maryland; Derek Matravers, OU; Dominic Topp, Kent; and Dawn Wilson, Hull) with ARC faculty, as well as postgraduate students working in aesthetics and related disciplines at Kent and beyond. The postgraduate/early career workshop taking place the following day, June 6, will feature research presentations by Ryan Doran (Antwerp/Sheffield), co-editor of the BSA journal Debates in Aesthetics and Alaina Schempp (Kent), editorial assistant of Film Studies(MUP). The workshop will conclude with a forum on publishing in aesthetics and related fields.   The postgraduate/early career workshop on June 6 is co-sponsored by Debates in Aesthetics (formerly the Postgraduate Journal of Aesthetics). Both events are supported by the British Society of Aesthetics and the Analysis Trust. Debates in Aesthetics is a peer-reviewed, open-access journal for articles, interviews and book reviews. Published by the British Society of Aesthetics, the journal’s principal aim is to provide the philosophical community with a dedicated venue for debate in aesthetics and the philosophy of art. The British Society of Aesthetics (BSA) aims to promote study, research and discussion of the fine arts and related types of experience from a philosophical, psychological, sociological, historical, critical and educational standpoint. The Analysis Trust is committed to implementing and maintaining the BPA/SWIP Good Practice Scheme for learned societies and journal editors. Analysis is the most established and esteemed journal for short papers in philosophy.