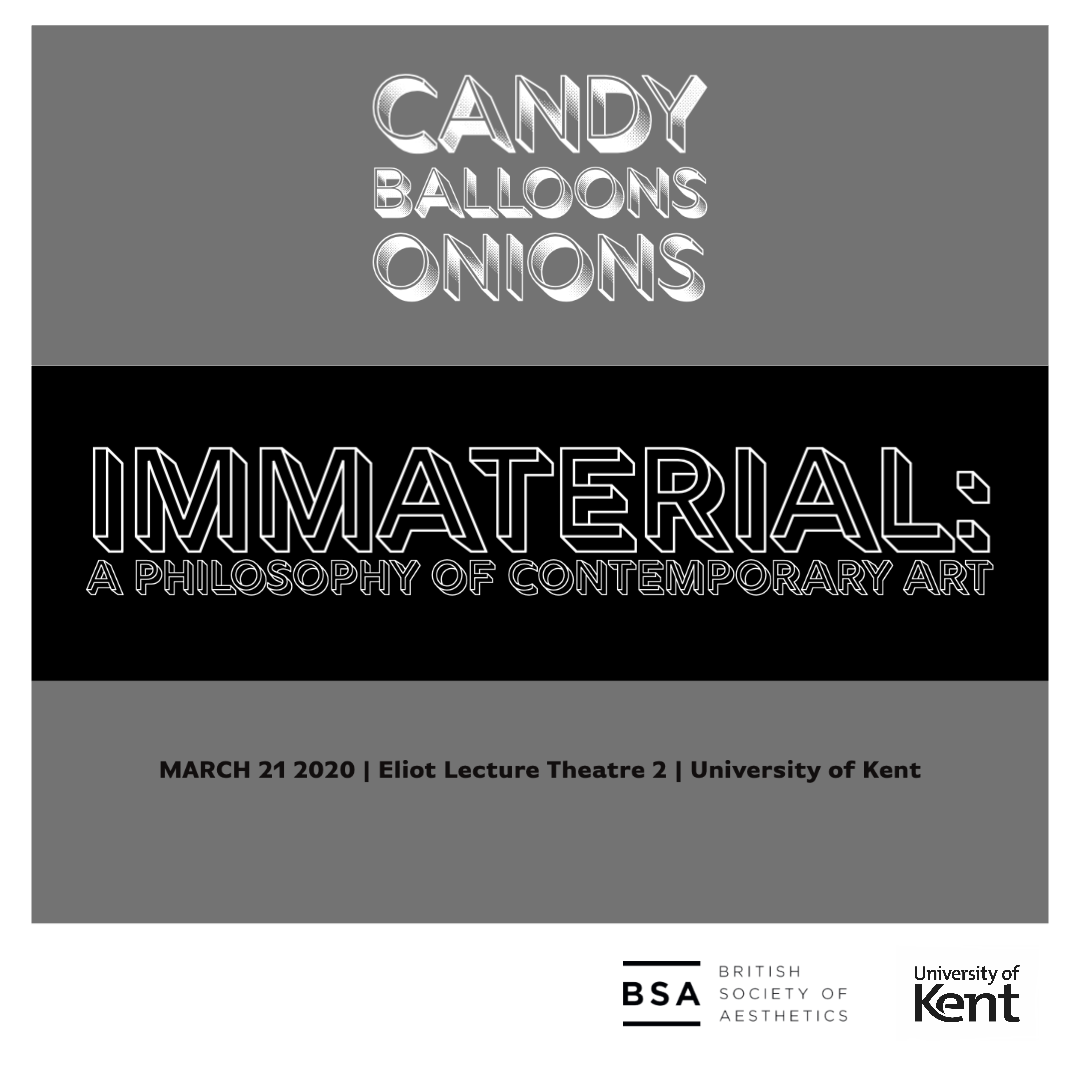 In her forthcoming book, Immaterial: A Philosophy of Contemporary Art, Professor Irvin examines the formal and structural features of contemporary art. The symposium will have an author-meets-critics style. Invited respondents will present short papers about the book to which Professor Irvin will respond.

Travel bursaries for students or early career academics from historically underrepresented groups are available, please contact the organiser of the event (Eleen M Deprez) for more information and details.

The symposium is made possible through generous funding from the British Society of Aesthetics.

All talks will take place in Eliot Lecture Theatre 2 at the University of Kent, information. The room has step-free disabled access and is equipped with Hearing Assistance Technology. If you would like to make use of the HAT please contact the organiser as soon as possible.

This event will be live-streamed and the recordings (pending the approval of the participants) will be made available on the ARC archive.

Abstract of Immaterial – A Philosophy of Contemporary Art:

In the art of the last several decades, a practice has emerged whereby artists sanction custom rules about how to constitute displays of their work, whether and how to preserve objects associated with the work, and whether and how audience members may interact with the objects. Over the course of three chapters, I discuss specific contemporary artworks that involve rules for display, rules for conservation, and rules for participation. I argue that rules sanctioned by the artist, much like the physical object(s) the artist selects or fabricates, are part of the structure of the work and help to shape what the work expresses.

I hold that rules are part of the medium of contemporary artworks in two senses: they are part of the matter out of which contemporary artworks are made (to borrow a turn of phrase from Simon Evnine), and they are also expressive resources within a system of practices and conventions that structure artists’ choices. Rules as medium have been deployed particularly effectively in two domains: institutional critique, since the articulation of custom rules lends itself to resisting established conventions and institutional practices; and explorations of human lifespan and mortality, since the articulation of custom rules shapes how the objects associated with a work evolve over time. However, the sanctioning of custom rules, like the fabrication of objects, can be used to support any expressive project.

I argue that contemporary artworks are historical individuals (to use Guy Rohrbaugh’s term) that have a hybrid physical and non-physical nature (except in those cases where there is no enduring physical component): that is, they are made of both physical stuff and rules. They can be created and can evolve over time; they are also susceptible of having occurrences, which are their displays. The display-of relation is, as Rohrbaugh suggests, determined by our specific interests in a particular art form. Broadly, something counts as a display of the work if it sufficiently complies with the rules sanctioned by the artist and has the right sort of historical-intentional connection to the work.

What is “sufficient compliance” with the rules, and how should we think about displays that clearly violate the rules? I devote a chapter to examining cases in which the rules are violated, offering guidelines for how we should understand such cases and how institutions should act when full compliance with the rules is impossible. I argue that non-compliant displays can sometimes count as displays of the work, and that it can be legitimate for an institution to intentionally mount a non-compliant display. However, there is a point after which non-compliance disqualifies a display from counting as a display of the artwork. And if mounting a sufficiently compliant display becomes impossible, the work may be destroyed.

Finally, I address the fact that regarding the artwork as made out of rules makes the artwork’s very nature subject to interpretation as well as to forms of vagueness and indeterminacy that might seem troubling. The rules for a given work are sometimes expressed through multiple utterances generated over an extended time period, and extracting the rules from the artist’s communication can be a complex process. Even when the rules are articulated in a single statement, the rules tend to embody forms of vagueness and indeterminacy: even a clear and thorough set of rules will not determine how to handle the full array of possible future circumstances. I argue that the specter of interpretation, vagueness and indeterminacy does nothing to impugn either the claim that artworks can be made of rules or the view that rules are a distinctive aesthetic resource. I discuss the epistemology of such works from the institution’s and the audience member’s perspective, and advocate measures the institution can take to help audience members grasp the work more fully.

Is the emergence of a practice of articulating custom rules a positive development in contemporary art? I would say so: rules as medium have been used to open up a new realm of creative and expressive potential that many artists have used effectively. This is not to say, though, that rules as medium are always used well: bad art can take any form.